“It was once called the Salton Riviera and a miracle in the desert.  The Salton Sea is different now; dead fish, decaying area, foul odor , and dangerous toxic fumes. It’s a wasteland.  Once California’s largest lake, now it’s on the verge of extinction, many claiming it is beyond repair.  Rodney Smith PhD., Managing Partner of the Sea To Sea Bi-National Canal Co., joined KUSI’s Logan Byrnes on “Good Evening San Diego” to discuss how he will save the dying Salton Sea.  Smith has a plan called SEA TO SEA where he wants to build a channel from the Sea of Cortez to the Salton Sea at a cost of 1.2 billion dollars.  This would be the first effort to review the tragedy and utter incompetence of the State on this issue. 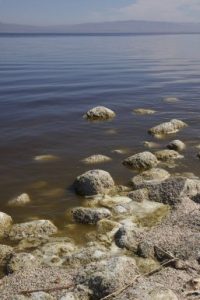