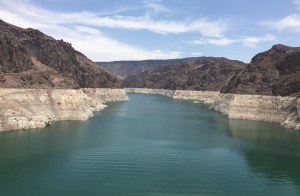 I Imperial Valley— Local farmers may soon be forced to bite the bullet and find ways to use significantly less water in 2023 — potentially for a lot longer.

This drastic measure may come as a result of an emergency water conservation effort to prevent further depletion of the Valley’s main source of water, the Colorado River. If less water flows down the Colorado River, the consequences could be catastrophic for the two reservoirs — lakes Mead and Powell — that feed into the so-called basin states.

For example, if water levels in Lake Mead continue dropping, it could bring water and hydropower to a grinding halt, all due to a relentless drought over two decades.

The Imperial Irrigation District, the largest water agency in California, is nearing final negotiations with Arizona — one of the lower basin states — to see how much water each state will be able to conserve. And the bar is high.

In June, the federal Bureau of Reclamation requested the states, water agencies and Native tribes along the Colorado River basin to propose ways to collectively conserve up to 4 million acre-feet of water in 2023. They must all reach a deal by mid-August.

How this will impact the farmers who rely on the Colorado River to grow their crops and sustain the principal economic engine of the Imperial Valley can perhaps be better understood through the various ways the Imperial Irrigation District distributes water throughout the region, and how farmers make do with a persistent drought that seems to have no end.

How much is an acre foot of water?

Water, in general, is measured by the acre-foot, meaning that one acre-foot covers an acre of land one foot deep. One acre-foot of water equals about 326,000 gallons, enough to supply a family of four or five for one year.

How much does the Imperial Valley get?

The remaining 2.5 million acre-feet of water are then distributed to farmers, residents and businesses throughout the Imperial Valley each year.

How much of it goes to farmers and how much to residents?

In short, 97.8 percent of water goes to agriculture while just over 2 percent goes to residential, industrial and commercial users.