My name is Rob Zimmer and I have owned, and operated Spectrum Advertising located in Imperial County since 1989.

A large part of Spectrum is to facilitate public relations for clients such as the County of Imperial.

I am very proud to say, the then Imperial County Board of Supervisors contracted me and my company to represent the County of Imperial as their Public Information Officer for eight years.

The New River and Salton Sea have always been important issues for Imperial County.

In the early 1990’s I was tasked to attend bi-cultural task force meetings in the US and Mexico for the clean-up of the New River.

Issues that concern our area have always been a passion of mine for more than 30 years. To bring more attention to this unique area, I founded Communityspectrum.org which was originally created in 2006 to showcase our unique area’s community happenings.

Knowing that most agricultural drainage water, also known as tail water was about to cease in 2017. I created and submitted a plan to mitigate dust as the Salton Sea shoreline receded.

In 2018 Community Spectrum featured a story called “The Receding Salton Sea” which started Saltonsewatch.com so our viewers could see for themselves what is happening at the Salton Sea

As a past contracted Public Information officer for the County of Imperial I have served on many local, State and Federal committees tasked with the goal of improving the quality of life for Imperial County citizens.

My contracted service with the County of Imperial ended just before the 2,000’s

A historic agriculture-to-urban water transfer agreement was signed in 2003 to facilitate the growing need for more water to service San Diego County.

As part of the water transfer agreement, local landowners/farmers were required and provided incentives to implement water conservation practices to mitigate the negative impact to Imperial County from the water transfer.

Agricultural runoff stopped flowing to the Salton Sea in 2018

I have lived and worked in Imperial Valley for most of my life. My father was a farmer who graduated from Cornell.  I worked on the family farm and financed my degree in Plant Science by harvesting cotton. Season after season of picking cotton near the Salton Sea I could witness for myself how the morning winds would bring in a haze from the Northwest that would later in the day mix with a haze out of the South.

I water skied and fished at the Salton Sea in the sixties. 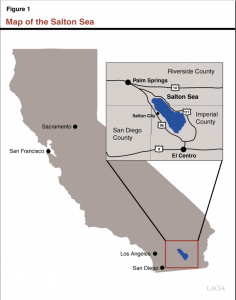 Saltonseawatch.com videographers have documented happenings at the Salton Sea and as you can see by past visits the water remaining in the Salton Sea is receding rapidly.

The Salton Sea is the largest inland body of water in California.

As its water recedes exposes more and more shoreline of toxic elements that will impact populations as the wind blows.

To help mitigate the potential health issues arising from small potentially contaminated particles of dust from the Salton Sea and becoming airborne with the possibility of becoming inhaled by humans, Spectrum has developed a plan that can be implemented immediately.

Spectrums plan is to curate a liquid droplet spray containing primarily water combined with a small amount of a certified organic dust control compound. The compound already exists and is available today. This compound, when dispersed with water, binds to smaller PM 2.5 micrometer particulate matter and makes the particulate larger and much easier to suppress from becoming airborne.

Through a series of stories Community Spectrum will update our viewers with the latest local happenings at the Salton Sea.