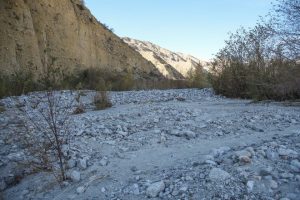 The Whitewater River, which normally flows year round in the Southern California canyon that bears its name, has run dry there, confounding some hikers expecting a brisk and scenic flow after recent heavy rains.

But those storms are the culprits, says Whitewater Preserve manager Lucas Wilgers, who oversees the area for the Wildlands Conservancy.

“It’s kind of counterintuitive … but when larger storms happen, so much water is falling such a short period of time, it just accumulates and kind of coalesces up above,” he said.

Fast-moving water carries mud, ash and other debris — including material from the 2020 Apple Fire burn scar — down from steep mountain slopesand dumps it at the stretch of river in the preserve, about 20 minutes northwest of Palm Springs in Whitewater Canyon. 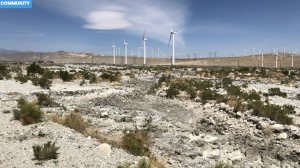 California, Arizona and Nevada are set to further cut back use

Two and a half years after signing a deal aimed at averting a damaging crisis along the Colorado River, water officials from California, Arizona and Nevada are discussing plans to take even less water from the shrinking river and leave it in Lake Mead in an effort to prevent the reservoir from falling to dangerously low levels.

Representatives of water agencies from the three states said they are firming up the details of a deal that would leave an additional 500,000 acre-feet of water in the reservoir next year, and the same amount again in 2023 — about double the quantity of water used annually by Las Vegas and the rest of southern Nevada.

For California, the deal would mean participating in water reductions prior to Lake Mead reaching levels that would otherwise trigger mandatory cuts.

The talks took on urgency this summer after federal projections showed growing risks of Lake Mead falling to critically low levels, despite plans for mandatory cutbacks throughout the Southwest that the states agreed to in 2019.

With the reservoir in a first-ever shortage and those cuts still insufficient, water management officials settled on a goal of together leaving half a million acre-feet of additional water in the reservoir instead of sending it flowing to farms, cities and tribal lands. The stored water would be roughly as much as 1.5 million average single-family households use in a year.

“We’ve got to stabilize the lake with this plan,” said Tom Buschatzke, director of the Arizona Department of Water Resources. He said representatives of California, Arizona and Nevada developed the framework of the deal within about two months after they saw projections showing growing risks of Lake Mead dropping to lows that would trigger much larger water reductions in all three states.

The deal would nearly double the reductions in planned water deliveries next year among the three states beyond those already planned under the 2019 agreement, called the Drought Contingency Plan. This new proposal, dubbed the 500+ Plan, would partially involve securing money to pay some water users to voluntarily relinquish water.

“We are estimating that we’ll need $100 million for those two years from the three states,” Buschatzke said. And while it’s unclear how much may be available from the federal government, Buschatzke and others said they hope to see a similar amount contributed from Washington, with funds available through the newly signed infrastructure legislation.

The water would come from various sources, including farmers who would be paid for leaving portions of their land dry, tribes that would contribute water supplies, and water agencies that would leave some water in Lake Mead instead of taking it out as planned.

Negotiations on the details are continuing, and officials from California and Arizona said they hope to have the overarching agreement ready to be signed next month at a conference in Las Vegas.

Arizona has pledged $40 million toward the deal. Board members of the Southern Nevada Water Authority are scheduled to consider approving up to $20 million in contributions this week.

The board of the Metropolitan Water District of Southern California is scheduled to consider the proposed agreement next month.

If the details of the proposal come together as planned, 500,000 acre-feet of water over two years would mean water levels about 16 feet higher in Lake Mead.

The reservoir, the country’s largest, has declined to 34% of its capacity, the lowest point since it was filled in the 1930s with the construction of Hoover Dam.

For now, the talks have focused on lining up funds and water for two years. But Buschatzke said it’s intended to be a five-year plan, lasting until the current agreement expires at the end of 2026, by which time the states will need to have negotiated new rules for dealing with shortages.

If the winter were to bring heavy snow to the Rocky Mountains, it could still help ease the shortages. But the region’s water managers said they’ve decided to plan for more of the dismal runoff they’ve seen in the watershed during the past two years of extreme heat and parched conditions.

Bill Hasencamp, MWD’s manager of Colorado River resources, said if such extreme dryness persists for another year or two, then Mead could end up at such low levels that cuts would become “unmanageable.”

“By proactively taking the actions now, we can reduce the risk of hitting those levels and having to make these large, unpredictable cuts,” Hasencamp said. “It’s better to do it sooner than you need it, so you can have a little bit more control.”

Without such a plan, if nothing were done and the reservoir continued to drop, he said, then the whole region could be forced to deal with much larger cuts.

“Then it’s unmanageable. And it’s lawsuit time and fighting,” Hasencamp said. “So a much more collaborative approach has always been our preference. And we think now is the time to step up.”

Word of the proposal came as California water officials announced that statewide conservation efforts were “backsliding.” Although Gov. Gavin Newsom has urged state residents to voluntarily cut water use by 15%, urban areas statewide decreased water use just 3.9% in September compared to the same month a year ago. The reduction in water use was smaller than in August, when Californians used 5% less.

Buschatzke said officials from the three states have together identified 500,000 acre-feet of water that could be freed up in 2022 and 2023. He declined to give details, saying negotiations are continuing and those that contribute water could include farmers, tribes, cities and other entities.

“It’s basically paying people not to use water they’ve historically used,” he said, adding that participants would voluntarily and temporarily cede water in exchange for payments.

Such deals have been tried on a smaller scale in recent years. In California, MWD has scaled up a deal in which farmers in the Palo Verde Irrigation District are paid to leave a portion of their lands dry and fallow. In Arizona, the leaders of the Colorado River Indian Tribes have also been leaving some of their farmland dry in a similar deal.

“We’re going to look at mixing and matching water and money to come up with the plan that works,” Buschatzke said. “The key is getting the agreement down on paper in an enforceable way so that we know the conservation is going to occur in 2022.”

The Colorado River has long been chronically overallocated, with so much water diverted to supply farms and cities that its once-vast delta in Mexico has been largely transformed into a stretch of desert, with only a smattering of wetlands remaining. Most of the water that’s diverted — approximately 70% — is used for agriculture.

While a large portion of the water is likely to be purchased through the fallowing of farmland, participants in the talks said some water will also come from other sources, including urban agencies leaving water in Lake Mead instead of sending it through their aqueducts.

For example, California’s Imperial Irrigation District has been underusing its allotment in recent years. And that “underrun” of water then typically ends up going free-of-charge to MWD, which is the next entity in line in the priority system.

That unused water is projected to be about 95,000 acre-feet this year, and likely a similar amount next year, said J.B. Hamby, vice president of the IID board.

“All that water we don’t use or over-conserve in a year, instead of that going to Metropolitan, Metropolitan has agreed not to consume it and to leave it in the river, which is a huge plus,” Hamby said. “That’s kind of a major shift.”

Hamby said it’s encouraging that the three states have come up with the plan in just a few months.

Others agreed that the quick negotiations bode well for more collaboration in dealing with worsening shortages. Kathryn Sorensen, director of research for Arizona State University’s Kyl Center for Water Policy, said with Lake Mead at such low levels, the need for quick action is clear.

“If we get another bad year or two, you know, things look really dire. So I think the speed is commensurate with the nature and scale of the crisis,” Sorenson said.

“This phenomenon is likely the result of the hotter and drier conditions caused by climate change,” Buschatzke said in his written testimony. “This trend is one that water managers must take into account as we plan for the future of the Colorado River.”

The options for immediate measures, Buschatzke told senators, include additional mandatory water cuts or voluntary conservation of more water in Lake Mead, and the talks among the states were focused on the voluntary path.

Scientists have estimated that about half the decrease in runoff in the watershed since 2000 has been caused by unprecedented warming. And this heat-driven aridification is projected to significantly worsen as temperatures continue to climb.

Brad Udall, a water and climate scientist at Colorado State University, likened the water reductions under the existing deal to a parachute — one that is too small and being opened too close to the ground.

“This new plan gives us both a bigger parachute and we’re going to deploy it sooner,” Udall said. “So hopefully we can have a softer landing.”

Given the alarming declines in the river’s reservoirs, the flaw with the parachute analogy is that the end of the story would put the parachutist safely on the ground, Udall said. “We’re landing on the edge of a cliff, if you will. And there’s still further to fall. We need another parachute here.”

Hopefully that next parachute will be ready well before 2027, he said, when the existing rules expire, and the Southwest needs to have long-term plans in place for adapting to a hotter, drier watershed and a river that yields less water.